But why are we losing koalas?
Because koalas need forests.

Across NSW, koala habitat is rapidly being destroyed and fragmented. Most destruction is due to these six major threats:

Give me a home among the gum trees!

A prime example is Mt Gilead, near Campbelltown, offering wildlife corridors to Sydney’s last thriving koala colony between the habitats of the Georges River and Nepean River.

The home of Sydney's last thriving koala colony is under threat

Lendlease’s development will cut and narrow existing koala corridors, which will likely be the demise of this critical koala population.

Throughout the state, urbanisation has a significant cumulative impact over time. In the words of the NSW Chief Scientist:

“Few dense urban new developments in Australia have successfully, over the long term, avoided declining koala populations in the context of rapid growth in urban infrastructure.”

Koalas may be extinct before 2050 unless more is done to protect them.

Death by a thousand cuts

There are different types of logging in NSW:

The fallout of logging near Belligen.

NSW Forestry Corp tear down koala habitat and replant trees that are not koala feed trees, diminishing the chance of survival of this iconic species.

Non-compliance actions issued from the EPA to Forestry Corp in the 2020/21 financial year, for its operations on public lands alone. They have also been exposed logging protected trees inside plantation areas. 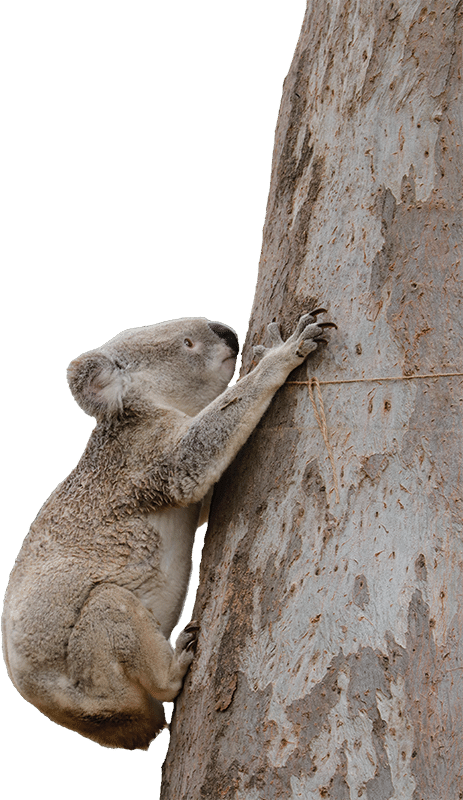 For koalas to survive, native forestry must end now and Forestry Corp held to account.

Give me a home among the gum trees!

Facing possible koala extinction, the state government has allowed tree clearing for agriculture and farming infrastructure to accelerate over the past decade:

Land cleared for agriculture is accelerating

= Hectares of woody vegetation lost annually to agriculture and farming infrastructure in NSW.
2009
2014
2019

This land is privately owned and is typically cleared for cropping or grazing. And although most of this loss happens in the central-west where few koalas live, thousands of hectares annually are still cleared in prime koala habitat areas in the east.

Weakened land laws have contributed to the accelerated loss. Since the Native Vegetation Act was repealed in 2017, landowners need only to “self-assess” any possible damage to koala habitat before clearing land.

The 2019-20 bushfires were devastating for NSW koalas:

,,000
Hectares of land in NSW inside the RFS fire ground
25%
Of all koala habitat in NSW in the fire ground
7800
Estimated number of koalas killed or injured in NSW
Sources: NSW DPIE and WWF

Thankfully, La Niña has since delivered two wetter and cooler summers. Before the swing back to hotter and drier weather, the government must rapidly implement preventive and proactive fire management strategies that emphasise cultural burning.

Our koalas rely on it for a healthy, biodiverse, and fire-resilient habitat.

Climate change will lead to more drought and bushfires in NSW. Koalas will need to adapt fast, but are disadvantaged because:

Old forests are irreplaceable carbon banks and new trees suck carbon out of the atmosphere. By reforesting key areas with fast-growing eucalypts, the government can simultaneously lower CO2 levels and give koalas the best chance over the long-term. That's a win-win.

750ha of woody vegetation is cleared for mining each year in NSW. Along with direct habitat loss, the water use in mining operations can lead to prolonged degradation of feed resources.

Although the amount of koala habitat lost to mining is small compared to logging and urbanisation, some key koala populations around the state have been affected.

For example, the koala population at Port Stephens has fallen from 800 to less than 200, in part due to land clearing for sand mining. The Maules Creek coal mine, near Gunnedah, has led to destruction in the Leard State Forest, home to a small but vulnerable koala colony.

What is our organisation doing on the frontlines?

Where and how do koalas live?
2

Why are we losing koalas?
3

What are we up against?
4

Help us find a win-win for koalas.